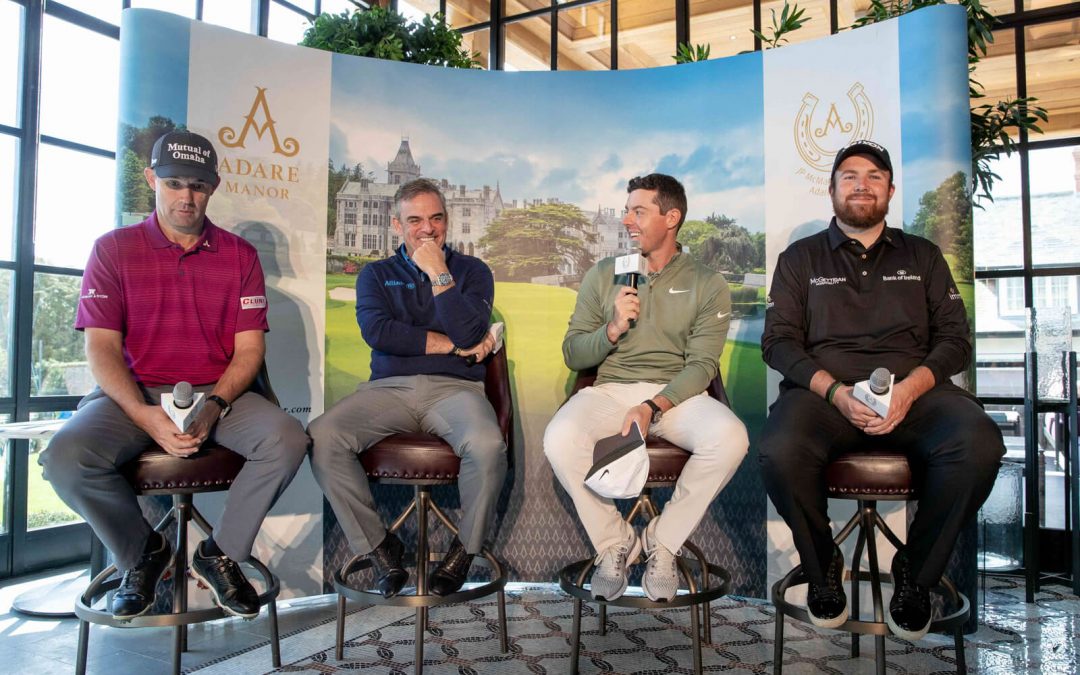 To mark the launch: Rory McIlroy, Padraig Harrington, Shane Lowry and Paul McGinley will compete in a one-day charity exhibition match at the newly designed championship Golf Course at Adare

The much-loved Pro-Am will take place on 6th &7th July 2020 at the Tom Fazio-redesigned championship golf course at Adare Manor. Once again, charities in the Mid-West are set to benefit from the event, with over €100 million raised since its inception in 1990. To launch the tournament today, Rory and Paul will take on Padraig and Shane in a fourball competition, with a €500,000 charity purse to be donated to their respective charities of choice.

Over 80,000 spectators attended the last hosting of the Pro-Am event in 2010, which saw many of the world’s leading golfers make the trip to Adare Manor, including Tiger Woods, Dustin Johnson, Jim Furyk, Justin Rose, Henrik Stenson, Ian Poulter, Adam Scott, Ernie Els, and a host of celebrities from the worlds of sport and entertainment comprising Samuel L Jackson, Michael Flatley, Hugh Grant, Martin O’Neill, AP McCoy and many more. The full list of participants joining McIlroy, Harrington, Lowry and McGinley in 2020 will be rolled out over the next two years.

The tournament returns to The Golf Course at Adare Manor which has been completely redesigned and is set to become one of the most recognised layouts in world golf. The competition format remains unchanged comprising one professional and three amateurs who will compete over the two days of the event.

Speaking about the launch of the Pro-Am, host and sponsor, JP McManus said: “It is with great pleasure and excitement that we announce the sixth staging of the Pro-Am, to be held in July 2020. Our heartfelt thanks go to Rory, Padraig, Paul and Shane for giving up their time to join us today.  This is an event that we are very proud to host and we’re delighted to see it grow so much since the very first Pro-Am held at Limerick Golf Club in 1990. We’re looking forward to extending a very Irish welcome to all the professionals and amateurs who will travel to Adare Manor in two years’ time, and also to acknowledge all the charities who put so much time and effort into their fantastic work.”

Four-time Major winner Rory McIlroy, who also played in the Pro-Am in 2010, revealed: “In international golf, it is recognised as one of the best organised and most enjoyable charity pro-ams on Tour. The combination of true community spirt, great supporters and players, a world-class golf course, all make it a fantastic and fun-filled tournament.  I was delighted when JP asked me to play in 2020 and I’ve no doubt it will be even more spectacular this time round, particularly playing on the newly redesigned championship golf course at Adare Manor”.

Tickets for the 2020 JP McManus Pro-Am are produced in the form of specially-designed golf caps and are now on sale from: www.jpmcmanusproam.com